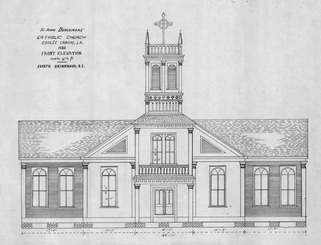 When compared to the two-thousand year history of the Roman Catholic Church, the ninety-one year history of Saint John Berchmans Catholic Church in Cankton may not seem very long.  But for the thousands of parishioners who have made Saint John Berchmans Church their spiritual home, the past ninety-one years have been a time of great graces and growth for us!

Saint John Berchmans Church was originally a mission of Saint Charles Borromeo Catholic Church in Grand Coteau.  Founded in 1819, Saint Charles Borromeo Church (and its later mission of Saint John Berchmans in Cankton) was one of the first Church Parishes to be established in the Acadiana area.  The Jesuit priests of Grand Coteau had a very difficult task as this largely-unsettled territory was enormous for the very limited number of Catholic clergy.  Thus, the religious education of the people living in this area was insufficient for a long time.  Things began to change, though, at the beginning of the 1900’s as more Church Parishes were established and the Jesuits and the Sisters of the Sacred Heart founded their respective colleges.  Archbishop Blenk, upon the advice of the Grand Coteau Jesuits, felt it necessary to create more Church Parishes to evangelize the people of this area, one of which was Saint John Berchmans Church, founded on February 1, 1925.

In order to more fully appreciate the beginnings of our Church Parish, we must travel back in time to around the year 1912.  A local resident, Mrs. Oscar Savoie, was battling sickness and about to undergo surgery.  She promised God that if her operation was successful and she regained her health once again, she would work toward the building of a chapel for the small community of “Coulee Croche”.  Her health restored, Mrs. Savoie began working to fulfill the promise she made to God.

A big bazaar was planned to raise funds.  Ladies of the community helped by going on the road, mostly in buggies, asking for donations.  Highway 93 at that time was a small gravel road with dirt roads intersecting.  Rose Miller, who was seventeen at that time, recalled the fundraising job to be a difficult one, with many farm gates to open and traveling on muddy roads.  The bazaar took place under the huge oak trees at the residence of Ernest Domengeaux.  Though money was scarce, the bazaar was considered a success, clearing $800.  The men in the community offered their skills and, thus, began construction of the on-room chapel on land donated by “Uncle Bud”, Mr. William Miller.  The site was located where now stands the home of Mr. Elmo Broussard, Jr.

The first Jesuit priest from Grand Coteau who came to minister in this area and celebrate Mass were Fathers Martinus Habig, Fred Waggemans, and P.J. Philippe.  We also find the names of Fathers James Moore and A.M. Fontan in our books.  It is interesting to note that when the first Mass was celebrated in the chapel, fifteen parishioners were present.  There were only two rows of pews in the building.  Mr. and Mrs. Marcellus Savoie were the first couple to be married in the chapel.  For the first time, in the year 1914, the children of “Coulee Croche” were able to make their First Solemn Communion in their own chapel.  Members of that first class included Bertha Miller and her brother Chester, and Mrs. Wilson “B” Credeur.

Soon, the small building was insufficient to accommodate our growing Parish.  It was dismantled and the material was used to construct the second Church building located just down the street in the middle of town and across from Mr. Gus Olivier’s store.  Five acres of land were donated for the church and cemetery in October of 1914, by Mrs. Albert Guidry, mother of Cankton’s doctor, L.A. “Cank” Guidry.  What is now our Church rectory was a vacant lot where parishioners could secure their horses and buggies while attending Mass.   The original rectory (priest’s home/office) was located where our modern Church Hall stands today.

Before long, another Church building had to be built.  Plans for the present Church were drawn by the Jesuit Brother Brinkhaus, who based his design on that of the Saint Charles Borromeo Church in Grand Coteau.  Fr. Phillippe, who used to come on Saturday evening to hear Confessions and spend the night in the home of A.J. Olivier, saw to it that concrete pillars were poured and the sills bolted down.  There was a joke around the community that everything Fr. Phillippe could put his hands on went to furnish his chapel at Coulee Croche.  The Stations of the Cross, some of the pews, and various sacristy furnishings were “borrowed” from Saint Charles Borromeo Church in Grand Coteau.

It was our first resident pastor, Fr. Hugh Dandurand of Quebec, Canada, who completed the Church in 1925.  Fr. Dandurand arrived in February from the Cathedral of Saint John the Evangelist in Lafayette, where he had been an associate pastor.  He was appointed pastor by Bishop Jules Jeanmard and served us for thirty-five years.  Fr. Dandurand lived in a small house near the Church, where his mother joined him later to live with him until her death in 1947.  During his tenure here, Fr. Dandurand saw our Parish grow physically and spiritually.  While today’s Church building is the one Fr. Dandurand saw completed, improvements have been ongoing throughout the years.  Initially, the Church windows were not stained glass, but were painted on the outside.  These windows were the only means of cooling the Church in the summertime heat, so they had to be able to be opened to let the breeze come through.  Initially, here was no means of heating the Church.  Not until the 1930’s, when Fr. Dandurand purchased the first two kerosene heaters, did parishioners have heat during winter Sunday services.  The heaters were placed in font of the first two rows of pews, turned on at the beginning of Mass and turned off after the homily in order to save kerosene (quite an incentive to sit near the front of the Church!).  The floors were bare wood with no rugs or paint.  The Church bell was operated from the choir loft and was rung by a parishioner pulling on a large rope.  The organ was operated by two foot pedals to manually generate air to the air bags.  Fr. Dandurand was an excellent organist and had a beautiful voice.  The choir and Father would often sing the 8:30 am Mass, praising the Lord Jesus in song.  Statues of the saints were plentiful in our Church and reminded us of the faithful disciples of Jesus that went before us.  By the time Fr. Dandurand left in 1960, the Church was completed, a new rectory had been built, all debts were paid off, stained glass windows installed along with other beautifications in the Church, and Fr. had saved an amazing $15,000 to leave to his priest successor.

Older parishioners will remember the Saint Catherine School, located about a mile and a half north of the Church on the Cankton-Sunset Highway.  The school was started by Mother Katherine Drexel, foundress of the Sisters of the Blessed Sacrament.  The property on which the school was located was bought by the Sisters from Telespore Jacque in 1925.  With dwindling enrollment and rising costs, the school was unfortunately, forced to close in 1953.  Without this facility and the generous work of the Sisters, many of our early African-American residents would not have had the educational opportunities that they had.  Three vocations to religious life were also the result of this Catholic school.  In recognition of the great influence of this school and the work of the Sisters in this area, a new public school in Arnaudville was named “Mother Drexel School”.  In 1965, the property of Saint Catherine School was donated by the Sisters to Saint John Berchmans Church.